From Bokaro to College in Paris 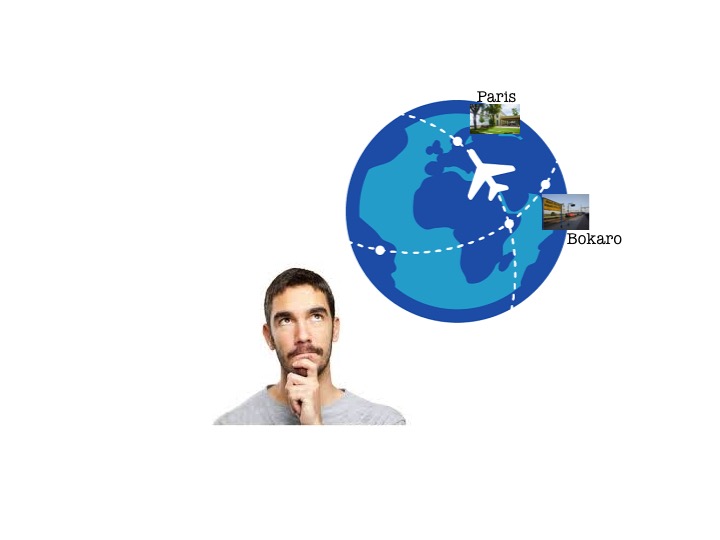 SciencesPo Paris is one of the most renowned institutions of higher education in France. A member of the confederation of "Grand Écoles", (an institution training the next generation of French elites and leaders; as they say in France, in varied backgrounds such as business, politics, economics, law, international relations, science) SciencesPo ranks #2 worldwide (QS World University Rankings) for its program in international relations and political science with an impressive curriculum in economics and law as well. With campuses all over France oriented towards a specific geographical region (Euro Asian, Euro American, etc.), this university is renowned for its strong research facilities in social sciences.

La France? What, When and How? In this article, I share my experience from Grade 8 at high school back in 2012 to getting admitted at SciencesPo Paris Campus du Havre, in 2017! Alors, on y va!

‘What does it take for an Indian student to go abroad?’ I asked my brother who was sitting in front of his FIITJEE math problem set, not really solving anything.

‘I heard they take some SAT test and then they’re off!’

‘Sounds nice, what is it about? Something like IIT?’ I asked curiously

‘I don’t know’, and with that he asked me to stop interrupting time and again.

I walked out of his room, but this SAT was something I needed to conduct my research on, I thought to myself. And this marked the beginning of my search engine quest for the Great American Dream. This SAT would be the key to my dreams at Harvard (or at least that’s what I thought at that point).

Day and night, I spent hours together reading through forums on CollegeConfidential, Reddit, Quora among many others; not only about the SAT but also what was this SAT useful for. Sometimes conflicting opinions on forums ended up making me feel discouraged and tired, who should I trust, who’s lying, who’s exaggerating, etc. etc. However, I did end up discovering terms like Ivy League, Standardized Testing, CommonApp, freshman, credit hours! The knowledge gained kept my curiosity alive to discover more in the hopes of really being able to reach a conclusion someday. Web surfing sessions taught me that the path to an undergrad education in USA had more to do than just taking SATs.

But what was I really interested in? A year later after taking Grade 9 economics at High School, I thought this was something I wanted to study more about! I had ordered a book on ‘Economic Principles’ by Gregory Mankiw, reading through it and discovering that he was a professor at Harvard, I was convinced that there’s so much more to economics than just scribbling definitions on paper in my high school economics classroom. I wanted to be a part of it!

Let’s get this done then! Let’s take the SAT, get the best application together and start applying! I was on my way to working towards the Great American Dream!

But was I? Not even close! This project had yet another important perspective to it which I had overlooked! Simply put, “MONEY!”

But how much? To investigate this, the appropriate database seemed CollegeBoard. A few searches and I was BLOWN. Needless to mention the amount in Indian Rupees, I very well knew it was beyond the reach of my family. I talked to my parents about it, they laughed, “obviously we don’t have crores to send you there, you still have time, start prepping seriously for JEE and you still might stand a chance”

But I wasn’t the kind who would listen, there must be some way! After all, not all undergrads could be so rich! I tried searching for scholarships and discovered need based and merit-based aid granted by some universities. This rekindled my hope and provided me a basis to convince my parents that the money spent on standardized testing wouldn’t be a waste.

Post months of debates and arguments at home and at school with my peers alike, I did end up getting the chance to take the SAT. Score? Around 1700/2400. Universities I could apply to? Certainly not Ivies! Case closed.

95% overall in ICSE. Everyone here at home was elated, except for me. No, not owing to the score but because I knew what was to follow. Science, IIT-JEE coaching and then engineering at either the elite IITs or some other university.

However, this 95% provided me an opportunity to bargain for my American cause all over again. When asked what I wanted for being amongst the Top 10 at my school, I blankly stated ‘another opportunity to work on my project to study abroad’. By this time, my parents were convinced that I indeed was serious about what I was trying to do, given my score at ICSE. I was soon given the green light to carry on, and if needed, work with a counsellor.

We narrowed all our choices down to ‘Collegify’. With their accolades and reputation all over the newspapers, we thought it would be a worthy investment in at least giving a direction to my project. It sure was expensive but then we couldn’t find a better option, expert guidance was necessary to shape the best possible profile, enough for a generous financial aid package. I’ll describe the entire journey of ‘almost applying to US universities’ in my next article, just to avoid making this one too long for its purpose.

However, US election results poured in soon. I wasn’t (and am still not) an expert in political affairs and policy effects and the anti-immigrant statements by the honourable US President scared me off. The question now was ‘is it a sound decision to be there for 4 years only to realize that a job is a distant dream?’ Finances too seemed to be difficult to get provisioned.

Even though I had my CommonApp essay and profile ready at this point with an ACT Composite of 30, I never ended up applying.

Hong Kong and Singapore were suggested as viable alternatives to me in case I didn’t want to consider USA any longer. I made some good use of my CommonApp essay and with some minor tweaks, ended up sending them for applications to HKU and HKUST alongside NTU Singapore. Got admits from all the three!

ISC scores weren’t that good. I perfectly screwed math (tough luck). Offers from HKUST and NTU were put on hold, though they did provide me an opportunity to appeal and do something to make up for the bad math score. HKU was willing to accept me with some reservations, however. Oh, I had applied for a BSc in Quantitative Economics and Finance, math was an indispensable part of the coursework, this had to happen! With just some 2 months or so to take AP Calc I and II, I began working for those exams to make up for my ISC math.

Hong Kong was still not that cheap and even though we would be able to afford it with some aid I had been awarded (which was later put on hold too, lol), it still proved to be financially strenuous.

I began searching again and realizing that deadlines for applications at UK were gone long by, I widened my search to Europe. Narrowed down to France (SciencesPo, ESSEC) and Germany (Jacobs, TUM) for economics and/or business. Financially, except ESSEC and Jacobs, the other three seemed viable. I considered applying first to SciencesPo, fearing that the deadline was near! Turns out that I indeed had 3 days left to send in my application! I forgot about AP Calc and did everything to send in my app to these unis. In almost a month and a half, I had an admit at SciencesPo! The thought of being at a university renowned for training top diplomats, policy analysts, some economists and Presidents seemed amazing! Again, being in Europe and being able to take advantage of the Schengen Zone besides having to learn French (which in my opinion is still easier than learning Cantonese) seemed to another lucrative opportunity. I ended up accepting my offer and on August 18, 2017 landed at Charles de Gaulle.

My experience at this institution and in this country for 2 years (the third year is an exchange year abroad), at the time of writing this piece, is something which probably deserves another separate article dedicated to it but to put it down simply, it has been a roller coaster ride, with lots of realizations and life lessons along the way. More on that, later!

Donc, oui, that’s how I landed in France, quite unexpectedly but I’m happy I made this choice. Things could have been better or worse, had I ended up taking some other decision, I’ll never know!